The importance of role play

Role play is a hugely important part of children's development. One of my nanny families expressed a huge interest in their child (aged 3) learning maths and the alphabet and were concerned that all their son seemed to do at nursery was play...

I took a deep breath and explained to them the importance of play at this age, how valuable it is to children and the many areas it can help to develop. I could go on and on but I will try in this post to just focus on role play.

This came up at home today, because Seb recently got some Playmobile for his 2nd birthday, which he absolutely loves. He has named one Seb, one Mummy (the pregnant one... clever boy ;-) and one Daddy. He put them all in the car today, all that is except Mummy who was put on the doormat. Now, if you have read some of my other posts, you will know that this is our time out spot.
'Oh dear!' I exclaimed. 'What has Mummy done? Is she sitting on the doormat?'
'Hitting,' was the response. He then walked into the lounge and shut the door to the hall, as we would do when he has time out. I asked him who mummy hit to which he replied 'Daddy.' Daddy and I had a little giggle at this, whilst also secretly hoping that this wasn't a conversation that went on outside the house and just for the record... Mr. NQP and I do not hit each other (or anyone for that matter)! We then discussed with Seb what should happen next and concluded that Playmobile Mummy needed to say sorry to Playmobile Daddy because hitting is unkind and then it would be time to move on and they can go on their trip in the car (which was the original plan!) Seb diligently went and spoke to Playmobile Mummy and she said sorry to Daddy and got in the car. 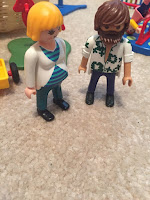 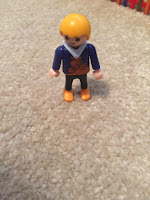 It was brilliant to watch, as Seb has recently (since he got the memo about being two and therefore terrible) been hitting a lot. People, toys, books, chairs, anything that frustrates him. On this particular day he had been to the doormat twice for hitting, so to see him role play it out, with him being on the other side of the battle was really interesting and hopefully a development in his understanding of hitting. Watch this space.

Though sometimes confusing and frustrating, it is important to allow children to navigate these role plays (rather than me saying, 'no! Mummy hasn't been naughty.' Or 'mummies don't sit on the doormat!') Role play is how children explore situations that they are endeavouring to make sense of. This 'making sense of' is often why children enjoy role playing dramatic situations that they are unlikely to have been in, like policemen, firemen and paramedics, but also those 'close to home' situations like mummies and daddies. Some children like to physically be each character through dressing up and some prefer to role play with figures like dolls or Playmobile. Both are valuable and neither is better than the other. Children are also able in these types of situations to stretch their imaginations and explore further situations. This is something that I pointed out to my nanny family, developing imagination is vital for all different aspects of learning, not just literacy but as wide spread as creative problem solving (key for the keen mathematician father!)

So the key points are:

If you would like to know more about role play, KiddyChart has some great info on her blog here...